A love story worth telling...

Never once did I expect, that I will be writing a love story when I started narrating the Canadian Immigrants Visa - application experience of my clients.

But when I became the Immigration adviser of Mr. Ray Anthony Sator, his love story and that of his girl friend Rowena Faustino (Ms. Weng), begun to take shape.

What makes their story special, and why it is worth telling, is simple.

It a true to life, its for real.

I am not passing this down to you, based on what I heard, rather, as an observer, the events I am going to tell you unfolded before my very eyes.

Let me tell it to you by following the lead of the great story tellers before me, by starting Ray's story with these famous lines:


I met a man, named Ray Anthony Sator, who's last name was spelled with an "o" not with a "u", he came to me to help him pursue his plans to move to a far away country, Canada.

It was at our first meeting that I have noticed Ray's inherent good qualities, he was quite reserved, a man of few words. Maybe, there is something to the saying, "Silent Water runs deep".

As I discussed his options, he asked very good questions such as, what made him qualified, what will make his application stronger, how long will the application be processed, etc...

Since during that time the processing period was still tagged at 6 years, and the mere fact that he signed the contract with our company to help him with his application at the same day, I would say that he is also very decisive.

He knows what he wants, the long wait did not put him off, as the Immigration rules constantly changes, he knew that he had to act while the conditions was still in his favor, he wanted to be filed while he was still qualified.

Still, on April 10, 2008 Ray's application was filed under the then, Simplified Immigration Process of the Ministry of Citizenship and Immigration Canada.

It was not until October 2008 that I learned that his girlfriend, had an application for Manitoba Provincial Nomination Program (MPNP), this was when Ray asked me to help her comply with the second stage requirements of the MPNP program.

Extending my services to Ray's Girl friend at no additional cost, I helped them by giving them needed advice to finish Ms. Weng's requirements to get her Visa.

At this point I told them that they have the option to get married at that time, so that they can move to Canada together, I even went as far as talking to the parents of Ms. Weng and attempted to convince them that this is a good option for the couple to take, but due to the parents own apprehensions, they did not agree to the plan.

Left with no choice, Ray and Ms. Weng, processed their respective applications.

Nevertheless, I witnessed how Ray continued to help Ms. Weng process her application to the best of his abilities.

It was a day of filled with mixed emotions, when Ms. Weng's Visa came out last March of 2009, and when she finally flew to Canada May 2009.

At this time, Ray's hope of reuniting with Ms. Weng was dependent on the results of his own Resident Visa application for Canada, before the current change of visa processing procedure, we expected this to happen after 6 years from the date he filed his application to the Canadian Embassy...
------------

Despite all odds, Ray continued to process his application, and with a stroke of luck, the changes in the Ministerial Instructions was published November 2008, favored the application he has filled.

Even though his current occupation as a Telco Engineer is not on the 38 high demand occupations, his previous work experience as a College Instructor in Don Bosco Mandaluyong, is part of the eligible applications for processing.

With a happy heart and renewed energy, Ray religiously completed all the requirements that was required of him, which included taking the IELTS, securing all work related documentations from his past and present employers, getting the documents for his graduate and post graduate studies, etc...

Call me a hopeless romantic, but I truly believe that Ray Sator and Weng Faustino are meant to be together.

We can all learn from Ray's story.

If you want something, you have to work hard to get it.

If you want a better life for yourself and for your loved ones, do what is necessary to make that dream into a reality.

Act while the conditions are in your favor.

Do not live to regret the day, that you will wonder "what might it have been" if you acted on an opportunity of a lifetime, knowing that you are one of the few - of the lucky ones who qualify for said opportunity.

Do not be discouraged, by the thought that you may not qualify if you apply, rather, act on an opportunity and hope that you will get what you want.

All applicants risk being disapproved when they apply for the Federal Skilled Workers application for Permanent Residents Visa application.

There are always two sides of a coin, while it is true that you risk being disapproved when you apply, it is also true that your application may also be approved.

On the other hand, if you do not submit any application, it is for certain, that you will not get a Permanent Residents Visa for Canada.

In life, there are no assurances but people still risks their hard earned money for certain investments.

Most of the time, people will be willing to put their money at risk, depending on the value of the promised reward.

- Some individuals, continue to buy lottery tickets despite the impossible odds.

- Parents, spend millions to send their kids to college even if they are not assured that their children will have a better quality of life when they graduate.

At the Canadian Immigration Consultancy we continue to motivate everybody who qualify for the program, because we know from past experiences that getting a Permanent Residents Visa will give your family and your loved ones a better quality of life.

The basic benefits of a Permanent Resident alone, will give your family - better Financial Stability (please read - Canada Benefits for your family)

Considering the returns we know that this is probably the most worthwhile investment that you will make for yourself and your your family.

Ray Anthony Sator, signed for the program because he also wants to have a better quality of life...

But more importantly, because he wants to be with the person who owns his heart, priceless...

If you have been told that you are qualified for the program, act now before its too late.

Give us a call and tell us your concerns, we may have a solution to your problems.

Avail of special promotional programs on our consultancy fees!

For any questions and clarifications, email them to jaraneta@go2cananada.com 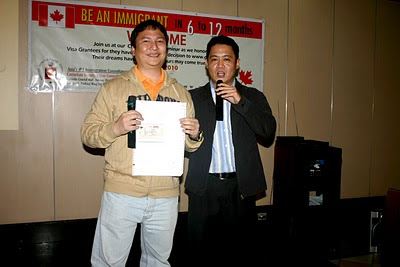