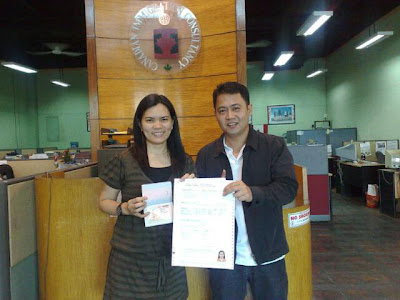 In helping my clients process their application for Canada PR Visa, under the revised Federal Skilled Workers program, I am amazed to see that the ones who does not seems to have the time, are the individuals who persist and goes out of their way to make sure that their applications are filed.

Such is the Case of Maria Ronna De Castro...

I first had a chance to meet Ronna last January 10, 2009 when she attended one of my Immigration orientation seminars for Canada.

During the one on one consultation, I had the impression that she was a very busy person may have a hard time to continue with her application for Canada.

She was already working in Saudi Arabia as a Nurse at that time and was only able to attend the said seminar because she was on her annual vacation.

Being a Nurse in Saudi Arabia is very difficult, based on my clients stories they would hardly have the time for themselves and would go home everyday dead tired due to the toxic schedule and the norm is that, it would be hard to say no when your superior asks you to render overtime which is almost everyday. On top of that, you would also be required to undergo trainings and profession proficiency tests to keep your job.

Did I mention that she was also trying to finish her Master's Degree for Nursing? Well she was.

I was surprised when she went back to the office (Canadian Immigration Consultancy) two days after to sign up our consultancy agreement to help her in her application for Canada.

At that point, it was disclosed to her that she would eventually have to provide for the following as part of her requirements for the second stage of her application:

Work Related documents/certifications from past and present employers

And other documentation requirements as proof that she is qualified to meet the passmark of Canada's Selection grid or what is commonly known as the Points System.

After the discussion, she made a commitment to provide the documents on time. Never have I heard her complain even once, about the volume of the required documentation for her application for Canada, the cost or the time that she will have to put to provide what is needed to get her Canadian Permanent Residents - PR Visa.

After talking to her when she signed the contract, there was no doubt in my mind that she will get her Canadian Visa.

I saw a girl, who was very determined to get what she wanted. It did not matter that she did not have her IELTS results yet and other documents. She knew that she had to act fast, to take advantage of the opportunity that the revised Canada Visa program is offering, to get the VISA fast (6 months to a year)!

Nor was she worried that she may not meet the IELTS score that was needed to get the Passing Mark for her Application for Canada. When I asked her if she knew what should do if she did not pass the IELTS, she said "Yes, I will take it again until I pass, it."

I shared the same confidence in her application, I knew she was a good case, maybe I was also influenced with the fact that, even though the revised program limits it to applicants with experience in the 38 High Demand Occupations, Ronna had a few advantages on credentials, she is a licensed Physical Therapist, a Licensed Nurse and a Master's Degree holder for Nursing.

I can not help but illustrate the determination of Ronna to get her Visa, for her, "failure was not an option", her mind was set. I knew even during that time that she will do whatever is needed to get her Canadian Visa.

It was not easy, because we were mostly communicating on-line, or thru Phone calls and text messages, it was inevitable that we were going to encounter some major bumps on her application.

So we went ahead with her application and filed it to the Centralized Intake Office (CIO) last March 26, 2009.

Then we received the Positive assessment from the CIO - May 7, 2009

As expected we had difficulty in completing the required documentations for the second stage which resulted to the delay in filing her full application package. It would appear that it was difficult for her to find the time to review for her IELTS as well as find the time to get the actual English examination, it also did not help that due to the nature of her status in Saudi she may not be able to get a major requirement - the Police Clearance.

She took her IELTS in Saudi Arabia.

We were able to file her full application package to the Canadian Embassy - July 29, 2009

With our help, she was able to send her IELTS result to the Canadian Embassy and meet the security check requirement of Canada on a later date.

After which we received her Medical Notice - October 28, 2009

Since she could not go home to the Philippines for this, she had to take the Medical examination in Saudi Arabia.

Even until this time there was again another problem, she could not go back to the Philippines to have her Passport Stamped with the Canada Visa. So again this resulted to additional delays.

It was a happy day when finally we received Ronna's Canadian Permanent Residents Visa - last February 4, 2010.

She is currently in Saudi Arabia, finishing her contract which will end within the year. She plans to first have her credentials assessed then take the licensure examination to practice her profession as a Nurse when she lands in Canada.

Following Ronna's example, interested applicants need to be on the look out for their opportunity and to act Fast! Before its too late...

Interested applicants also need to be honest with themselves, and do everything in their power to make their dreams come true. Rather than thinking of reason's why she could not apply Ronna did the opposite, with our help she found solutions to overcome her problems and she did it! She got the Visa!

If you are interested and have the Education; 4 years experience in one or more occupations in 38 High demand list of Canada you should act fast, and apply right now! Otherwise, if the list changes and your occupation is deleted you will no longer be able to apply.

If your circumstance is less complicated than Ronna's then all the more reason that you should not delay your application.

Like Ronna, only you can make this happen for yourself. Give us a call, we will be happy to answer your queries and concerns. If you were already formerly assessed by us and know that you are qualified, then you should apply right now, if not today.

Unknown said…
Concerning the case of Ronna, please, I like to know, did she eventually return to Philipine for her visa to be stamped or she had the option of sending her passport?
March 26, 2010 at 9:50 AM