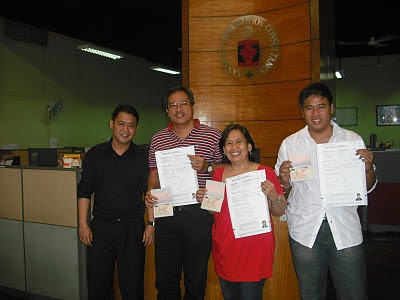 (Me, Amando Paraiso, Lady in Red Evelyn Paraiso and son Paolo)
It was last November 28, 2008 when the Canadian Government released their publication to revise the Federal Skilled workers (FSW) program for Permanent Residents (PR) Visa application, limiting it to those who has work experience int the 38 High Demand occupations.

Under this particular PR Visa for Canada, only those who has 4 years work experience in the 38 High demand occupations, will be able to get full points in the work experience criteria of the PR Visa selection criteria.


Probably one of the greatest job satisfaction that I get in working for my company (Canadian Immigration Consultancy), is meeting extraordinary individuals, and helping them with their desire to live and work in Canada.

Such is case, when I met Armando and Evelyn Paraiso, both of them are quite successful in their chosen fields. Armando is a Financial Officer in a Reputable company here in the Philippines and Evelyn one of the few Insurance Agents whom I like that I have the chance of meeting.

They attended one of the orientation seminars that I regularly gave at Canadian Immigration Consultancy seminar Coastal Mall in September of 2008; then signed signed a contract with us to help them process their Immigrants Visa application (Armando as Principal Applicant) on September 20, 2008, a hint of their true dedicated nature.

During that time, we were already telling our applicants that there will be a change in the FSW PR Visa Canada application, limiting qualified applications to but a few occupations. But this did not stop the Paraiso Family; they recognized the great opportunity in immigrating to Canada and pushed through with their plan.

When we processed their applications, we have experienced some minor bumps as we went along the way, which was not easy for them due to the busy nature of their Jobs, still they persisted.

On November 28, 2008 the publication from Citizenship and Immigration Canada announcing the revision in the PR Visa Canada program was announced, and Auditors and Accountants was included in the High Demand list, favoring them in their applications.

What can I say, only those who acts on getting what they want, are those who are rewarded with good results.

On February 28, 2009 we were able to file their applications to the Centralized Intake office (CIO) in Nova Scotia Canada.

Less than a month later, March 27, 2009, we received a correspondence from the CIO that Armando's application was positively assessed, and giving us instructions to submit the full application package to the Canadian Embassy in Manila within 120 days.

But with this great news we also experienced another problem with completing their requirements. Part of the documents required was, for Armando to get a Police clearance from Bahrain, and for non residents, getting the clearance is not easy.

With our help, we were able to file the application, pending the submission of the Police clearance, before the 4 months deadline given to them.

It took several months before the Saudi Embassy was able to release the Police clearance.

On August 18, 2009, we received their Medical Notice and the deadline for the Police clearance.

On September 18, 2009 we submitted their payment for the Right of Permanent Residents Fee (RPRF).

On November 13, 2009 we finally submitted their long awaited Police Clearance.

Then the Visa Notice was issued by the Canadian Embassy a month after that.

On January 12, 2009, I gave the Visa's of Armando Paraiso, Evelyn Paraiso and son Paolo (or as shown in the picute posted above).

On this day, I was talking to them about their post Visa concerns, and Evelyn said, "Thank you Jay for all your help, for encouraging us and guiding us with our application", and I with the Paraiso's was overjoyed with their good fortune.

Receiving a thank you from a client; being part of their application, is a priceless reward and it never fails to put a smile on our face no matter how many years we have been hearing it. Each application is different, each applicant tells a different story.

"Thank you Mam Evelyn and Sir Armando, for letting us help you with your struggles, as well as sharing with us your success, and I say that I hope that we will not loose touch with all sincerely."

I would have loved to take credit for the blessing that was bestowed to them, but I can't.

It really is Armando and Evelyn who got the Visa's for themselves. I am sure, that they will do well in Canada despite the challenge that awaits them there. For in my experience in talking to a lot of qualified individuals, only a small percentage of these people or should I say a small group really has the courage to pursue their dreams persistently until it becomes a reality.

A lot of people dreams of going to Canada for reasons that even though life is also hard in Canada, the benefits given by the Canadian Government really helps Immigrants become economically stable (such as Free Education, Free Health Care, Unemployment Income, Adequate requirement, etc...).

But Armando and Evelyn, stands out from all the people that I have spoken to, because they belong to that small group that knows how to take advantage of an opportunity by grabbing it in its reigns and pointing it towards their goal getting a PR Visa for Canada.

And also because despite their already flourishing careers in the Philippines, they are honest with themselves in thinking that it is still hard to maintain economic stability due to our present circumstances.

Maybe if it was just the both of them, they would not have applied, but because they still continue on hoping for the best for their children even after their children already finished college, they hope to give Paolo the best chance on his career and hope to also bring the rest of the family to Canada in the future.

If you have four (4) years Work Experience in the list of 38 high demand occupations and been assessed to be qualified in Canada's Points system, you have to apply right now, otherwise when the list of qualified occupations changes and your occupation is deleted from the list, you will loose your chance and it will be too late.

Give us a call, start your applications right NOW!