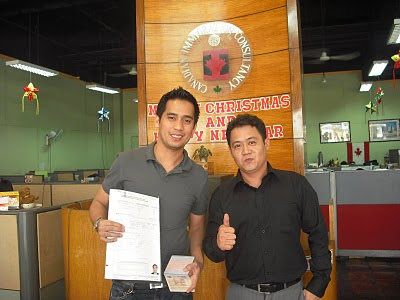 I first met Mr. George Hansen Reyes, when he came to the office to inquire about getting a work permit for Canada as a Nurse. Since our Company is an Immigration Consultancy Firm for Canada, his inquiry was directed to our Sister Company International Jobs Recruitment Company (I-Jobs).

At that time I-Jobs still had an Employer who was asking for a database of Filipino Nurses bound for Alberta.

Due to his busy schedule, he was not able to attend the Orientation seminar for Alberta, until the time came when the Work Visa applications become scarce due to the current recession in North America.

On the early part of 2008 Mr. Reyes learned about the revised Permanent Visa application for Canada that processed 38 High Demand Occupations. Where if qualified an applicant may get his Canadian Permanent Residents Visa within 6 months to a year.

We filed his application for Permanent Residents Visa for Canada last March 31, 2009 to the Centralized Intake Office (CIO) in Canada.

A month and a half after, May 15, 2009 we received his CIO positive Assessment for Canada, making him Eligible to proceed with the final assessment of his application, the submission of original documentation to the Canadian Embassy.

We filed his original documents to the Canadian Embassy last July 28, 2009.

At this stage the Embassy asked Mr. George Reyes to submit additional documentations to fix a problem with his Personal History as well as asked to undergo additional Medical Procedures.

After the problems were finally solved, we got his Visa Notice December 8, 2009 where he was requested to submit his passport, the Passport of his wife and that of their Dependent child.

If you ask Mr. George if he found his application for Permanent Residents Visa Easy, the answer may be a definite, "No".

But despite the problems that he encountered in his application, he still persisted, went on with his application and now bear fruits to his Efforts by receiving the best Christmas Gift for his Family, a Permanent Residents Visa.

They plan to go to Canada on February 2010. His first order of business, taking the Licensure Examination to allow him to practice his profession as a Nurse, you see Mr. Reyes on top of getting his Permanent Residents Visa was already positively assessed by the College of Registered Nurses of British Columbia (CRNBC). To know how to practice your profession right away, you may read Foreign Credentials Referral Office (FCRO)
__________________

This can be your story too, if you have the Education, 4 years Work Experience in the list of 38 High Demand Occupations within the last ten years, then you have a strong Case.

But you have to act Fast the list of Occupations currently in process may change soon. If it does and your occupation was omitted in the list then you can no longer apply. If you are interested, you should take advantage of this great opportunity or else this gift for yourself and your Family will disappear.